The K vitamins (K for coagulation) belong to the fat-soluble vitamins along with vitamins A, D and E. They are still relatively unknown to the general public, but – like all vitamins – they play an important role in health. Until now, vitamin K has traditionally meant vitamin K1, which mainly occurs in green (leaf) vegetables such as spinach, kale and broccoli and is bound to chloroplast membranes there.

Today understands vitamin K is a family with two main forms: vitamin K1 (phylloquinone / phylloquinone), which mainly acts in the liver and plays an important role in blood clotting, and vitamin K2 (menaquinone / menaquinone), which Activates a number of important proteins in various tissues, which primarily ensure the utilization of calcium, but also show numerous other effects.

Thanks to the increasing number of research work in recent years, especially in the field of bone and Cardiovascular health, vitamin K2 has also gained in importance today. It occurs in different forms, the short-chain vitamin K2 MK-4 and the longer-chain vitamin K2 MK-7 being the most important representatives. MK-4 is found in certain animal foods such as Meat, liver and eggs and generally shows a high level of activity.

However, due to its short half-life and low bioavailability, it is currently rarely used in food supplements. Vitamin K2 MK-7 is formed by bacteria (food, large intestine) and occurs naturally in fermented foods, e.g. in sauerkraut, buttermilk or some types of cheese. However, the MK-7 concentration in these foods is very low (

The different forms of vitamin K

Vitamin K1 and K2 have a common ring structure and only differ by the length of their side chains and the number of double bonds in the side chains. It has been proven that this influences the absorption and stability and therefore the different half-life and bioavailability of the K vitamers can be explained. Because vitamin K1 is bound to chloroplast membranes in green vegetables, its bioavailability is only around 15–20%. The half-life is also short at 1–2 hours.

Of all K2 forms, vitamin K2 MK-7 has the highest bioavailability and the longest half-life (2–3 days). In addition to the length of the side chains and the number of double bonds, the spatial arrangement is also of decisive importance for biological activity. These different forms of vitamin K2 are known as the cis and trans isomers. Only the spatial configuration all-trans is biologically active, while vitamin K2 MK-7 in the cis form is almost ineffective.

So far 17 Gla proteins are known, including 7 blood clotting factors. Another important Gla protein is osteocalcin, which after its activation by vitamin K2 in the bone inhibits osteoclast activity and via the osteoblasts promotes the incorporation of calcium into bone tissue and thus bone mineralization. The bone matrix contains approx. 2% osteocalcin.

Another well-studied Gla protein, Matrix Gla Protein (MGP), appears to play an important role in protecting against vascular disease. It is assumed that MGP carboxylated (“activated”) by vitamin K2 binds calcium ions and surrounds them with a shell so that hydroxyapatite crystals do not develop and the affected soft tissue (e.g. blood vessels) does not become calcified.

The constant availability of vitamin K for blood clotting is ensured through a recycling process. In this way, the body can ensure that blood coagulation factors (especially K1-mediated) are almost 100% carboxylated. An additional supply of vitamin K in nutritive doses no longer improves the coagulation status of healthy people, but also does not increase the risk of blood clots (thrombo-embolic events). 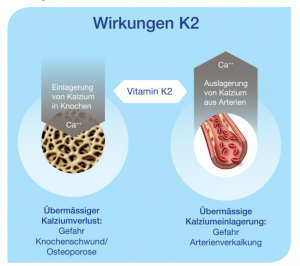 While vitamin K1 plays an important role in activating the blood coagulation factors, K1 has only a minor effect on activating osteocalcin and MGP due to its short half-life. VitaminK2 MK-7, on the other hand, has good bioavailability for the bones and blood vessel walls and can activate osteocalcin and MGP more effectively. An indication of the greater importance of vitamin K2 in this regard was provided by the representative Rotterdam study, which was able to show in almost 5000 people that an intake of vitamin K2 through food of> 30–45 μg / day compared to

The exact need for vitamin K is not conclusively known. It is assumed for vitamin K1 at around 1 μg per kg of body weight. These recommendations relate only to the ability to activate blood coagulation factors in the liver, but not to the supply of K2 and all functions that go beyond blood coagulation, which is why it can be assumed that these quantities are not sufficient. It is assumed that the proportion of vitamin K2 in the total vitamin K intake with our food is only 12–25%.

However, this amount does not seem to be sufficient for the complete activation of osteocalcin and MGP. MK-7, which is formed in the large intestine by intestinal bacteria, is hardly absorbed due to the lack of lipases and bile salts and we do not consume fermented foods (natto).

The importance of vitamin K2 for health

Based on epidemiological as well as intervention studies that have been carried out in recent years, there is a growing awareness of the importance of MK-7 for optimal bone and cardiovascular health. In Japan, v. a. in the northern provinces, where the consumption of natto is highest, the incidence of osteoporosis is much lower than in the western world. An epidemiological study was able to show that an intake of ≥ 200 μg vitamin K2 MK-7 per day in the form of natto resulted in a significantly smaller decrease in bone density in the femoral neck in women and men over 65 years of age. 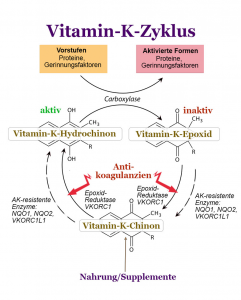 In a 5-year randomized double-blind clinical intervention study in 60-year-old women, daily supplementation with 180 μg vitamin K2 MK-7 per day compared to placebo over 3 years led to a significantly lower age-dependent decrease in bone density in the femoral neck and in the lumbar vertebra. In the same setting (180 μg per day of vitamin K2 MK-7 versus placebo) in postmenopausal women and in people with incipient coronary sclerosis, the same research group was able to achieve a significant decrease (-50%) in the dp-ucMGP level, dephosphorylated, undercarboxylated MGP) and observe the vascular calcification.

A meta-analysis by Huang et al. impressively show that a vitamin K2 dose of 100-360 μg MK-7 to 45 mg MK-4 over 6-12 months significantly reduced the frequency of fractures by 50% in postmenopausal women with a diagnosis of osteoporosis. Vitamin K2 is very well tolerated and no accumulation of undesirable effects was observed in the studies.

Only people who take coumarin-type anticoagulants (vitamin K antagonists, e.g. henprocoumon) should be careful. In principle, vitamin K supplementation is also advisable for these patients in order to prevent a vitamin K deficiency and keep the patient stable. However, there is still too little data on vitamin K2 and therefore its use in these people should only be carried out under medical supervision and close monitoring of blood clotting.

These are just a few of the facts that indicate that vitamin K fulfills important functions in the body that go beyond the classic activation of blood clotting factors, and thereby v. a. Vitamin K2 as MK-7 seems to play an important role. For people who want to do something good for their bone and cardiovascular health or who already have osteoporosis, supplementation with K2 at a dosage of 180 µg per day, as investigated in the relevant studies, is an optimal supplement. also in addition to calcium and vitamin D3.