Our body needs a lot of energy in the form of carbohydrates for long sporting units (> 2h). At the same time, sufficient fluid intake must not be avoided in order to protect the body from dehydration.

But what are the best energy sources for an endurance athlete? Sports drinks, gels or bars? In races, athletes seem to make different decisions. We see athletes who only take part in the competition with drinks, but also athletes who consume a complete “menu” of everything! To answer this question, researchers conducted a study at the University of Birmingham.

In the study, the Taking a sports drink compared to taking a gel.

Eight cyclists trained for two hours at moderate intensity. Some of the athletes consumed 1 gel per hour (with a 2: 1 glucose: fructose composition) with 200 ml of water. The other cyclists consumed sports drinks in the meantime.

In both experiments, the athletes received the same amount of carbohydrates and fluids. The average carbohydrate intake was high: 1.8 g / min 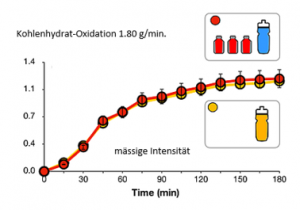 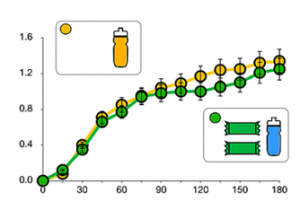 Here the difference between the bar plus water and the sports drink is small and statistically hardly any significant.

The carbohydrate consumption from the energy bar is slightly lower, but the difference is small. It is very likely that this is because this bar was very low in fat, protein, and fiber. A bar with more fat, protein and fiber will likely slow down gastric emptying and reduce the intake of carbohydrates.

The results of this study show that the form in which the carbohydrates are consumed for Carbohydrate oxidation doesn’t really matter .

In other words, as an athlete, you can mix sports drinks, gels, and energy bars as you like. Some athletes will prefer to consume only liquid. Others really have to eat something to get through longer races.

It is important that it fits YOU, so plan and test your competition nutrition early enough!