Professional tips: This is how the Bayern Munich team eats

Time and again, we ask ourselves what distinguishes amateur athletes from professional athletes. In addition to an incredible dedication and will to train that most people do not have in them, the athletes seem to display almost supernatural powers. In addition to a tough training regime, this is of course also due to a very conscious diet.

To do this, the athletes have to eat in a very disciplined manner, especially shortly before the important games. To make their lives easier, many professionals have their own cooks and nutritionists at their side. Team chef and TV star Alfons Schuhbeck cooks regularly for FC Bayern Munich and reveals the nutritional secrets of the super kickers!

What do the players pay attention to?

FC Bayern Munich has long been an unbeatable favorite in the Bundesliga. Last season, however, Borussia Dortmund showed new strength and is a serious competitor. It is all the more important that the Munich team stay fit. According to Schuhbeck, who has been known as a television chef for years, athletes should have a balanced diet.

This means that the focus should not only be on protein and good fats, as is the case with strength athletes, but that carbohydrates also provide important energy. Therefore, for the footballers, noodles, rice and potatoes are allowed on the plate, because fast sources of energy are needed for physical stress

Schuhbeck also pays attention to variety in color in his kitchen. Therefore, vegetables in many different colors have to be on the plate. That may sound absurd, but it makes sense, because the color of a variety can say a lot about the vitamins and phytochemicals it contains. Red fruits and vegetables often contain iron, green plants provide chlorophyll and yellow or orange often contain lots of L-carnitine. For Schuhbeck, the preparation of the food is particularly important.

He tries not to overheat vegetables or other ingredients, as this would cause them to lose many of their beneficial properties. Instead, he recommends salads, muesli with fresh fruits and cooked vegetables. His tip for everyone: lower the temperature while cooking! 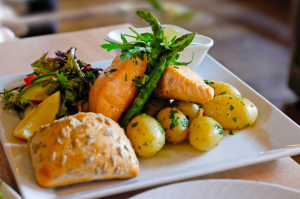 A day at FC Bayern Munich

Schuhbeck describes the players’ typical menu as very balanced. For breakfast, for example, yogurt is eaten with muesli and added omega-3 oils. There is also fresh fruit. A bread with cream cheese, fried egg and ham provides the players with all the nutrients and is easy to make yourself. At lunchtime, the focus is on proteins and vitamins. Every lunchtime starts with an antipasti buffet, from which players can choose something themselves. Fresh salads and the like are offered.

The main course consists of meat or fish with plenty of vegetables, e.g. Chicken with spinach or salmon with asparagus. Rice or potatoes are served as carbohydrates. The player menu also provides healthy fats. The TV chef only uses high quality olive oils that are not used for cooking, but only as a marinade. This way they do not lose their important nutrients. In the evening there is again fish and meat to promote muscle building and the regeneration of the players with the essential amino acids. Heavy carbohydrates are no longer on the plate because they can impair the players’ sleep.

This is what the athletes eat at home

Outside the training days, the players take care of themselves and have to show particular discipline here, because even professionals fall into the sin trap here. Robert Lewandowski told in an interview with Welt am Sonntag what his secret for absolute fitness is. For some time now, he has completely avoided dairy products, as well as soy milk and wheat. Since then, the striker has felt a lot fitter. Lewandowski’s wife, a fitness trainer, also gave him a very special trick. The Bayern Munich player eats his menus in reverse order. He starts with dessert, then he eats the main course and finally soup and salad. This is supposed to boost the metabolism better. Mats Hummels, who moved back to Bayern Munich in 2016, is very open about his vices.

In an interview he said that he used to struggle with frustration eating. However, the motivation from exercise and a change in diet helped the player to live healthier lives. He largely dispenses with animal products such as meat, fish and milk, as well as sweets. The player feels much more comfortable with this diet and proves that a vegetarian or vegan diet is also possible for professional athletes. Jerome Boateng, on the other hand, does completely without gluten.

Due to an intolerance, he feels tired and weak as soon as he consumes bread, pasta and the like. Instead, he enjoys fresh vegetables and fruit, plus valuable protein and carbohydrates from potatoes or corn. For players like Hummels and Lewandowski, a balanced diet is essential in order to have enough energy in the game. With the help of nutritionists and cooks, the professionals are always perfectly cared for and the men show a lot of discipline in their everyday life.